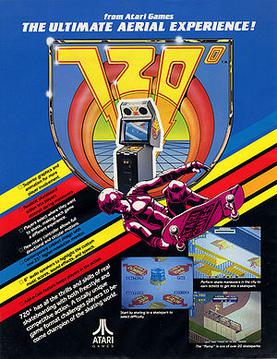 720 Degrees, or 720Â°, is a 1986 arcade game by Atari Games. 720Â°, a skateboarding game, is notable in that along with BMX Simulator, it is one of the first extreme sports video games, and has a unique timed structure that requires the player score points in order to keep the game going. The game's name comes from the "ultimate" trick, turning a full 720Â° (two complete circles) in the air after jumping off a ramp. 720Â° has the player controlling a skateboarder ripping around a middle-class neighborhood. By doing jumps and tricks, the player can eventually acquire enough points to compete at a skate park.