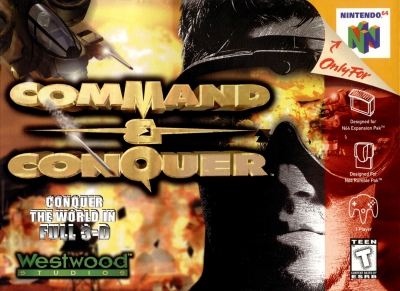 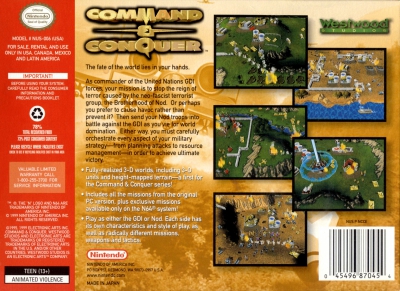 Command & Conquer is a real-time strategy game developed by Westwood Studios and released by Nintendo in 1999. Like the PC version released in 1995, C&C focuses on the war between two ficitional organizations - The Brotherhood of NOD & the Global Defense Initiative. When a mysterious resource called Tiberium emerged on Earth, a conflict developed between both factions, as the GDI wanted to contain the biological material while the Brotherhood wanted to harness it. 15 missions on either side are available in which various units and structures, including artillery, tanks or light infantry, have to be used adequately to crush the enemy base, find traitors, protect vehicles or conquer certain areas.

M Official
Nintendo
Seal of Quality
MODEL # NUS-006 (USA)
FOR SALE. RENTAL AND USE
ONLY IN USA. CANADA. MEXICO
AND LATIN AMERICA
IMPORTANT!
BEFORE USING YOUR SYSTEM.
CAREFULLY READ THE CONSUMER
INFORMATION AND
PRECAUTIONS BOOKLET
TOTAL BOVEREDFBER
RECYCLE WHERE
VALUABLE LIMITED
WARRANTY CALL
1-800-255-3700 FOR
SERVICE INFORMATION
"A. e. THE -N" LOGO AND N" ARE
TRADEMARKS OF NINTENDO OF
AMERICA INC.
0 1999 NINTENDO OF AMERICA INC.
ALL RIGHTS RESERVED.
01995. 1999 ELECTRONIC ARTS INC.
COMMAND & CONQUER. WESTWOOD
STUDIOS AND ELECTRONIC ARTS ARE
TRADEMARKS OR REGISTERED
TRADEMARKS OF ELECTRONIC ARTS
IN THE US. AND/OR OTHER
COUNTRIES. WESTWOOD STUDIOS IS
AN ELECTRONIC ARTSTU COMPANY
TEEN (13+)
ANIMATED VIOLENCE
The fate of the world lies in your hands.
As commander of the United Nations GDI
orces, your mission is *top the reign of
terror caused by the neo-fascist terrorist
group. the Brotherhood of Nod. Or perhaps
you prefer to caÃ¼se havoc rather than
prevent it? Then send your Nod troops into
battle against the GDI as you'ie for world
domination. Either way. you must carefully
orchestrate every aspect of your military
strategyâ€”from planning attacks to resource
managementâ€”in order to achieve ultimate
victory.
â€¢ Fully-realized 3-Ã¶worlds. includihg
units and height-mapped terrainâ€”a first *foe
the Command & Conquer series!ÃŸ
â€¢ Includes all the missions from theori9inale
aVaÃ¥ableonly onthe N64@ system!"
Play as either the GDI or Nod. Eice#ide has
tits own characteristics and style of Play, ayo
Well-as fadigally different misSions,
Nintendo'
NINTENDO OF AMERICA INC.
PO BOX957. REDMOND. WA 98073-0957 U.S.A.
www.nintendo.com
MADE IN JAPAN
4
NUS P NCCE
45496 87045