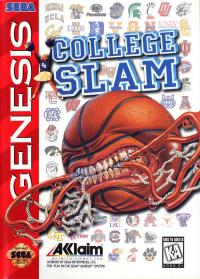 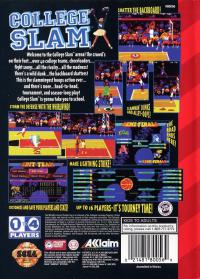 Each team starts out by picking any 2 out of 5 players to play with during the game. During timeouts, and at half-time, the player has a choice to make substitutions. When a player makes 2 baskets in a row, the announcer says "He's heating up", and if he makes 3 baskets in a row without the other team scoring, he says "He's on fire!", which makes it easier to score. In the season mode, the player can pick from 44 teams, and then play a 20 game season against quality competition. In the tournament mode, 16 teams compete for a chance to win the national championship. The player also has the ability to edit teams and players. The game itself is not realistic, as players can easily make full-courts shots and occasionally, players get struck by lightning as they dunk. The final score of the games are usually in the middle to high 100s.

College Slam for the Sega Genesis takes the blistering action of NBA Jam and brings it to campus. Choose from over forty of the top college teams and play head-to-head, semi-finals, tournament or even a twenty-team season mode. Enjoy fight songs, cheerleaders and the ability to edit the names and stats of five players on your team. As in NBA Jam, this is a two-on-two arcade game with an emphasis on action. Grab numerous power-ups, find hidden players, enter secret codes, or make substitutions for injured stars. Be prepared for some outrageous dunks that can shatter backboards and crazy moves such as the whirlwind. Score three baskets in a row and you'll be "on fire." No matter which platform you choose, you can rest assured that each version of College Slam features the same gameplay and options.