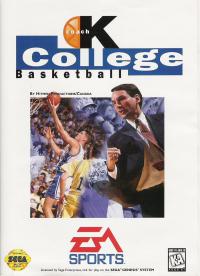 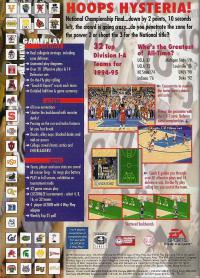 There are three game modes: Season, Tournament (with three save slots for both) and Exhibition, and options follow the standard set from the NBA Live series. Gameplay also remains unchanged, with the typical three basic actions (fast running/steal, pass and shoot/block for A, B and C buttons) and the ability to call moves on the fly by pressing one of the buttons along Start (three or six moves can be set, depending on the joypad used).

Take one of the most successful coaches in the NCAA's history, team him up with EA SPORTS and what do you get? Coach K College Basketball for the Sega Genesis. Select one of 32 top Division I-A teams from 1994-95 and guide them through an entire season, exhibition game, or tournament.

Choose from over 50 offensive plays and 14 defensive sets to add to your on-the-fly play-calling system, or let Coach K guide you through each play in detail. Feel the action with realistic animations, shattered backboards, dunks, alley-oops and mid-air passes. Hear the sounds of a college game with crowd chants, music, and cheerleaders.

A weekly top 25 poll will let you know how you are faring and examine your saved team, player, or user stats to see exactly where your players stand. Up to four hoopsters can get in on the action (with a 4 Way Play adapter) and you're free to customize tournaments from 4, 8, 16 or 32 teams.