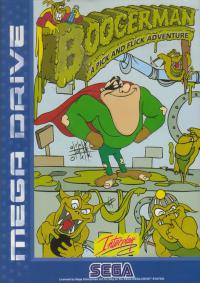 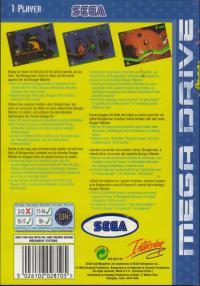 He thinks he's a hero, but he's snot! He's mean. He's green. And he nose how to pick a fight! He's BOOGERMAN, as slick as he is deep, and he's on a pick 'n' flick adventure to save the world. He's stretched to the limit of blowing away the vile slimebags who are bent on sticking it to Planet Earth, any way, every way, and everywhere they can. You're his first pick to help him rescue the whole world before it's flushed down the toilet. Join the flick-or-be-flicked race to pull the plug on the Booger Meister and his gang of filthy stinkers who aren't afraid to fight dirty... because yours is the only finger which can wipe 'em out!

You are Snotty Ragsdale: suave millionaire by day, unappreciated superhero by night. Your mission is to enter the bowels of the Earth to stop the evil Booger Meister from polluting the planet. The journey will take you through six worlds, each having multiple stages: Flatulent Swamps, The Pits, Boogerville, Mucous Mountains, Nasal Caverns and the mysterious Pus Palace. As Boogerman, you can use your natural powers to defeat eighteen different enemies and four bosses on your way to confront Booger Meister himself.

These abilities include the Flick, Burp, Loogie, Super Burp, Fart and Super Fart. Boogerman can also run, jump, duck, swing and fly through the air with all the grace of a young Baryshnikov. Grab various power-ups such as Milk Bottles or Chili Peppers to keep your powers running at full capacity. This 24-Meg cartridge boasts animation of up to 30 frames per second in an attempt to recreate cartoon-like visuals. A password system lets you continue your adventures at a later time, although you might not want to resume play right after dinner. . . .