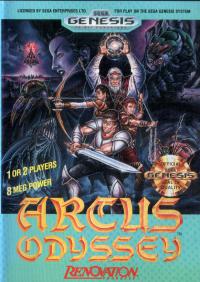 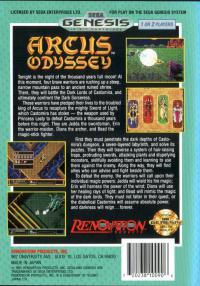 Tonight is the night of the thousand years full moon! At this moment, four brave warriors are rushing up a steep, narrow mountain pass to an ancient ruined shrine. There, they will battle the Dark Lords of Castomira, and ultimately confront the Dark Sorceress. These warriors have pledged their lives to the troubled king of Arcus to recapture the mighty Sword of Light, which Castomira has stolen - the weapon used by Princess Leaty to defeat Castomira a thousand years before this night. They are Jedda the swordsman, Erin the warrior-maiden, Diana the archer, and Bead the magic stick-fighter. To defeat the enemy, the warriors will call upon their individual magic powers: Jedda will wield his fire magic; Erin will harness the power of the wind; Diana will use her healing rays of light; and Bead will mimic the magic of the dark lords. They must not falter in their quest, or the diabolical Castomira will assume absolute power, and darkness will reign... forever.

Once upon a time, some 1,000 years ago, an evil sorceress named Castomira brought chaos and destruction to the peaceful land of Arcus. Only one individual had the power to stop her: the beautiful Leaty. Their ensuing struggle would go down as the most powerful display of force in history. Leaty and Castomira fought for days on end, but the powers of the Light eventually overwhelmed the evil sorceress. Leaty then forged a magical sword to forever seal Castomira into the Dark World, and trusted its safekeeping with the King of Arcus. After centuries of order, minions of Castomira have now stolen the sword from the current King!

Arcus Odyssey is an action-adventure that's played from a three-quarter perspective. Choose one of four characters in your quest to retrieve the magical sword: Jedda the Swordsman, Erin the Warrior Maiden, Diana the Archer, or Bead the Mage. The goal is to progress through eight levels of an underground labyrinth on your way to confront Castomira herself. Are you feeling intimidated by the monsters and twisting passageways? A friend can play simultaneously! Game progress is continued via passwords, which are available after completing each stage.