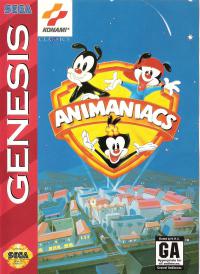 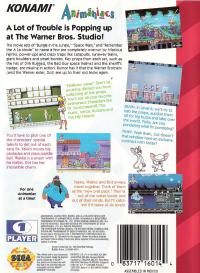 Animaniacs is a video game that is based on the hit animated series of the same name. Unlike regular platform games, the player usually runs from the enemies rather than fighting them. Characters include Yakko, Wakko, and Dot, Pinky and the Brain, most of the supporting cast, as well as Ralph, the Warner Brothers studio guard. Animaniacs was made into two games which bore no relation to each other in terms of gameplay, despite both being made by Konami. One was for the Super Nintendo Entertainment System and the other was for the Sega Mega Drive/Genesis and Game Boy. The SNES and Mega Drive/Genesis version were released in 1994, and the Game Boy version in 1995.

Yakko, Wakko and Dot have been up to their crazy antics again--this time they've decided to gather important props from the Warner Bros. studio to fill their new "hip pop culture" store. Help them realize their ambition by exploring the following six movie sets: The Adventure of Dirk Rugged VII, Space Trucking, Remember the A La Mode, Once There was a Man Named Oscar, To Scream or Not to Scream, and Pinky & the Brain Take Over the World. On each stage you'll need to find the target item (such as a hat, badge or helmet) while solving puzzles and avoiding traps.

Instead of using one character, however, you'll be able to switch between all three at any time during the game (the other two will tag behind the leader). Each character also has a special ability which will prove useful in your quest: Yakko can push or pull boxes, Wakko has a large mallet to pound things, and Dot can "flirt" by sending hearts to charm characters blocking your path.

Since each level is based on the theme of a particular movie, you'll have to watch out for giant boulders, catapults, runaway trains, and many other dangers. Animaniacs also includes cameos from characters: Mindy and Buttons, Dr. Scratchansniff, The Nurse, Rita and Runt, Ralph the security guard, The Good Feathers and The Hip Hippos. A password will let you continue your progress at a later time.