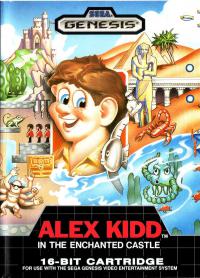 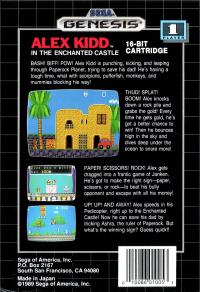 BASH! BIFF! POW! Alex Kidd is punching, kicking and leaping through Paperock Planet, trying to save his dad! He's having a tough time, what with scorpions, pufferfish, monkeys, and mummies blocking his way. THUD! SPLAT! BOOM! Alex knocks down a rock pile and grabs the gold! Every time he gets gold, he's got a better chance to win. Then he bounces high in the sky and dives deep under the ocean to snare more. PAPER! SCISSORS! ROCK! Alex gets dragged into a frantic game of Janken. He's got to make the right sign - paper, scissors, or rock - to beat his bully opponent and escape with all his money! UP! UP! AND AWAY! Alex speeds in his Pedicopter, right up to the Enchanted Castle! Now he can save his dad by tricking Ashra, the ruler of Paperock. But what's the winning sign? Guess quick!

Alex Kidd leaps from Sega Master System to Genesis for his first and only 16-bit adventure. It seems the young hero's father has gone missing somewhere on Paperock Planet, and it's up to players to help find him. The platform-style action has little Alex exploring a number of vibrant locales and defeating such enemies as mummies, baboons, and scorpions throughout 11 levels of play. Alex can perform a combination of jump kicks and punches to defeat his foes, while he searches for chests filled with helpful items. Each stage also features some rather unusual boss encounters, which involve playing games of "rock-paper-scissors" instead of more traditional battles. A victory earns players money used to purchase one of seven offbeat gadgets, from a pogo stick to a wizard's cane.