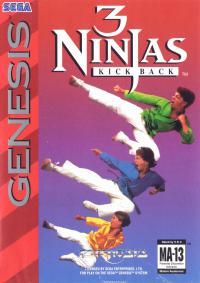 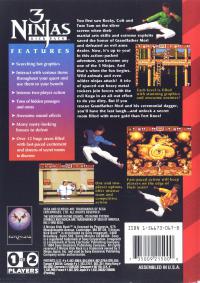 3 Ninjas Kick Back follows 3 young ninja brothers, Rocky, Colt and Tum-Tum as they assist an old Samurai in retrieving a prized dagger which has been stolen by his rival. The dagger, once given to the Samurai as a reward, will be passed along to younger generations once it is restored to its rightful owner. The boys learn ninjitsu and karate as they fight evil forces that are older, more powerful, and bigger than them.

If you liked the feature film, then you'll love the Sega Genesis adaptation of 3 Ninjas . Play as one of the three teenage martial arts experts Rocky, Colt, or Tum Tum as you take on an army of ninjas, wild animals, and the evil Koga in an effort to rescue your sensei (Grandfather Mori) and his magical dagger. Go at it with or against a friend in the Two-Player mode working your way through beautifully rendered environments in your search to find your mentor. And be sure to keep your eyes peeled for secret areas and rooms that may offer great rewards. In 3 Ninjas Kick Back you won't have any time for kicking back Grandfather Mori is counting on you!