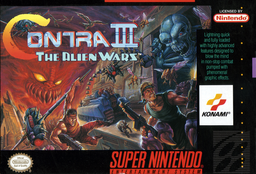 Contra III: The Alien Wars, released in Japan as Contra Spirits (é­‚æ–—ç¾…ã‚¹ãƒ”ãƒªãƒƒãƒ„, Kontora Supirittsu) and in the PAL region as Super Probotector: Alien Rebels, is a 1992 run and gun video game for the Super Nintendo Entertainment System produced by Konami. It is the third console iteration of the Contra series, following the original Contra and Super C for the NES.

Set in the futuristic year 2636, the alien invaders that were defeated during the previous installments have decided to launch a full-scale war against mankind on Earth, starting the "Alien Wars". Unlike the previous Contra games for the NES and Game Boy, the futuristic setting was kept for the American version. However, the identities of "Bill" and "Lance", the original Contra heroes, were changed to their descendants "Jimbo" and "Sully", maintaining the continuity of the previous localizations. Likewise, the alien invader was once again changed to "Red Falcon".