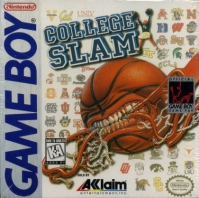 Its gameplay is nearly identical to NBA Jam, on which it is based. It includes most major Division I colleges, but there are many, such as the University of Tennessee, the University of Notre Dame, and Mississippi State University (who had just made a run to the Final Four that year), that are not included. The player can play tournaments, a season, or a single game. The game, however, did not enjoy the success of NBA Jam.