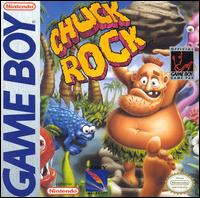 The setting of the game is a fantasy prehistorical Stone Age-era world that is shared by both neanderthals, woolly mammoth, saber-tooth tigers, dinosaurs, and various assorted wild primeval monsters such as prehistoric mammals, giant insects, man-eating plants, and other exotica; thus, the setting is similar to that of films such as One Million Years B.C., or television shows such as The Flintstones or Dinosaurs.

Based on the hit 16-bit prehistoric platform game released a year earlier, the Game Boy version of Chuck Rock puts players in the role of the title character, a simple but good-hearted caveman who's been wronged and is out to set things right. As in the Genesis and Super Nintendo version of the game Chuck's wife Ophelia has been stolen away by rival caveman Gary Gritters, and Chuck is going to get her back. The Game Boy quest leads Chuck through ten side-scrolling levels in four themed worlds. In addition to the invaluable abilities to jump and duck, Chuck can belly-butt, perform an "odor kick" when he jumps, and (of course) chuck rocks: three special abilities that help him overcome the many enemies he faces on his way to rescue Ophelia. Other environmental puzzles challenge Chuck's progress at points, and a big boss waits at the end of each area. The game's MIDI soundtrack features some original rock compositions.