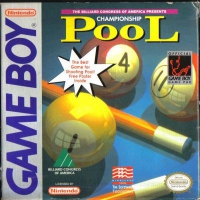 The game is a straightforward, virtual version of pool, and includes several games: eight-ball, nine-ball, three-ball, ten-ball, fifteen-ball, straight pool (14.1 continuous), rotation, equal offense, and speed pool. The player may play against the computer or up to seven other players using the same console using the "Party Pool" (multiplayer) option. Other gameplay modes include "Tournament" (single-player, computer opponents), "Freestyle" (players make up own game rules), and "Challenge" (single-player, shot practice).[

There's no need to drag a pool table around anymore whenever you want to play billiards. All you have to do is get a copy of CHAMPIONSHIP POOL for the Game Boy. You can shoot some stick in four different modes: Tournament, Party, Freestyle, and Challenge. Tournament pits you against the best players the computer can offer. If you keep missing shots, you can use the Challenge mode to get in some practice. The Freestyle mode lets you create your own games, and if you have a lot of friends the Party mode will let up to eight people play using the same Game Boy. Every kind of billiards game is available including 3-Ball, 9-Ball, 8-Ball, 10-Ball, 14-1 Continuous, Rotation, 15-Ball, Straight Pool, Equal Offense, and Speed Pool. Now you can play billiards anywhere with CHAMPIONSHIP POOL.

Four modes of play, wide variety of games, support for up to eight players, extensive instruction manual, no chalk on your hands