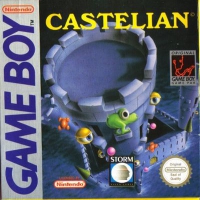 A platform game with some distinctive unique features. The player character, a small creature called Julius, is on a mission to destroy eight towers that have been built in the sea, by planting bombs at the towers' peaks. Julius's progress is hindered by enemies and obstacles, which he has to avoid in order to reach the top of the tower

Guide a little green alien in his quest to scale eight cylindrical towers in Castelian. The two-legged creature must climb stairs and jump across gaps to reach the top of each tower as quickly as possible. Each tower has a time limit, and adding to the challenge is a number of geometrically shaped enemies that can either be attacked or avoided. Contact with an enemy or walking across a weakened floor will cause the alien to fall down one level. Extra time can be added by completing bonus stages in between the eight main tower sequences. Castelian was originally released as Tower Toppler in European markets.