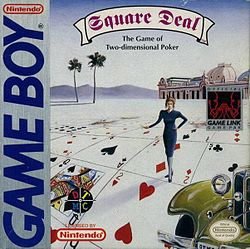 Square Deal: The Game of Two Dimensional Poker (known in Japan as Cadillac II (ã‚­ãƒ£ãƒ‡ãƒ©ãƒƒã‚¯II, Kyaderakku II)) is a video game developed by Hect for the Game Boy. The Japanese version serves as the sequel to the Family Computer game Cadillac. In 1999, Cadillac was also released for the PlayStation.