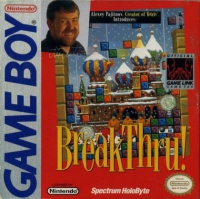 In the game, the player must move the cursor amongst a grid of different colored squares. All squares must be "removed", and squares can only be removed if they are directly touching two or more squares of the same color. Once squares are removed, blocks then shift downward and either to the left or right, to fill in the blanks. The game ends when either all blocks are removed, or time has run out. If the player comes to a point in which none of the remaining square match, a few options remain. A few "special items" help clear out blocks that don't necessarily match, such as an airplane block that eliminates a full line of square in the direction it is pointed in, or a block of dynamite that blows up every square touching it. Additionally, the player can also chose to drop new, randomly generated squares into the equation.