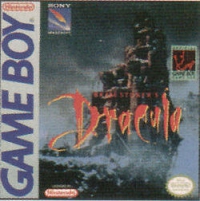 While based on the 1992 film of the same name, the game had very little to do with the actual movie. Several weapons can be used; ranging from the basic knife to the advanced shotgun weapon. The 16-bit renditions of the game were straightforward hack and slash games where players had to slash generic enemies in order to get to Dracula. There is a time limit that forces players to move quickly around the levels. Each chapter of the game starts off with a cover from a book. Checkpoints are used to maintain progress in a level after losing a life. Each level has a daytime and night time equivalent. A boss appears at the end of each night time level in order to test the playing skills and to reinforce the concepts that were taught in the daytime version of the level. The player controls a young lawyer named Jonathan Harker. Harker must free himself from Dracula's capture, follow him to London, and end his reign of terror.