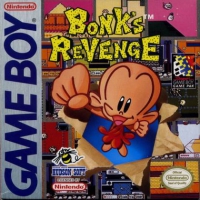 In the Game Boy version of this title, Bonk can turn into one of three unique heroes: Master Bonk, Hungry Bonk, or Stealth Bonk. Becoming Master Bonk dresses Bonk in a cape and provides him with Vulcan-esque ears, and gives him the ability to move faster and jump higher. Becoming Hungry Bonk gives Bonk an animalistic appearance with evil eyes and a mouth full of razor-sharp teeth, and gives bonk the ability to chew enemies to death, as well as providing him with a much stronger head-butt that can kill nearby foes. Becoming Stealth Bonk dresses Bonk in a striped jail outfit, and gives him the ability to enter special locked doors that lead to areas such as the bank, where Bonk can collect Smileys, the butcher's, where Bonk can eat more slabs of meat in hope for a different power-up, and jail, where Bonk loses a portion of his Smileys. Grabbing one of many tulips scattered throughout the game carries Bonk to a special bonus stage where he can face off against Mechabonk -- a RoboCop-esque version of Bonkâ€”in a best-of-three battle to "bonk" one another off the edge of a small stage. Winning two rounds provides Bonk with an extra life, while a loss transforms Bonk into Wounded Bonk, where Bonk resembles a mummy and takes twice as much damage as usual. The game overall is very similar to games in the Mario series, providing linear, side-scrolling action, multiple power-ups, and several small boss confrontations leading up to a final boss. Its treatment of power-ups is similar as well: taking a hit while powered-up causes Bonk to take no damage but instead lose his power. For those who struggle with the game, the game offers passwords after game-overs so the player does not need to start over from the beginning.