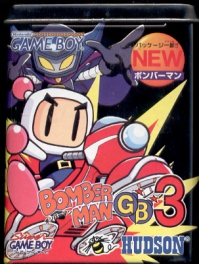 The 11th planet of Bomber Nebula, named Owen, faces a sudden earthquake. Deep within its underground, the terrible Evil Bomber had been trapped for ages. He finally rises to power and steals the Bomber Capsules from Bomberman. Bomberman and his friends then vow to take back the Capsules and defeat Evil Bomber... This game was only released in Japan. It is the last game in the Bomberman GB trilogy and features the appearance of a few new characters like Cutie Bomber.