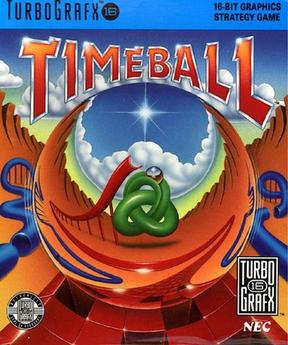 Timeball is a puzzle video game released by NEC for the TurboGrafx-16. The object of the game is to guide a ball along pieces of track by moving tiles like a sliding puzzle. The game's name in Japan is Blodia, an anagram of Diablo, the title of a computer game upon which Blodia is based. Versions of Blodia were released exclusively in Japan for the original Game Boy and the Sharp X68000. A spin-off titled Blodia Land: Puzzle Quest was released for the Famicom, replacing the ball with cartoon dinosaur-like characters. These versions were developed by Tonkin House and published by BrÃ¸derbund.