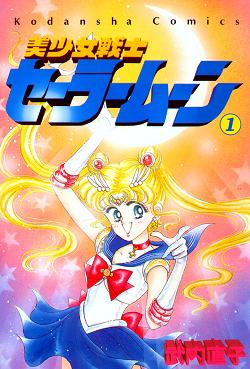 Sailor Moon (ç¾Žå°‘å¥³æˆ¦å£«ã‚»ãƒ¼ãƒ©ãƒ¼ãƒ ãƒ¼ãƒ³, BishÅjo Senshi SÄ“rÄ MÅ«n, originally translated as Pretty Soldier Sailor Moon and later as Pretty Guardian Sailor Moon) is a Japanese shÅjo manga series written and illustrated by Naoko Takeuchi. It was originally serialized in Nakayoshi from 1991 to 1997; the 52 individual chapters were published in 18 tankÅbon volumes. The series follows the adventures of a young schoolgirl named Usagi Tsukino as she transforms into the titular character to search for a princess and an artifact called the "Legendary Silver Crystal" (ã€Œå¹»ã®éŠ€æ°´æ™¶ã€, Maboroshi no GinzuishÅ, lit. "Phantom Silver Crystal"). During her journey, she leads a diverse group of comrades, the Sailor Soldiers (ã‚»ãƒ¼ãƒ©ãƒ¼æˆ¦å£«, SÄ“rÄ Senshi) â€” Sailor Guardians in later editions â€” as they battle against villains to prevent the theft of the Silver Crystal and the destruction of the Solar System.

The 18 manga volumes have been adapted into an anime series titled Sailor Moon which was produced by Toei Animation. The series was broadcast from 1992 to 1997 in Japan over the course of five seasons along with three feature films, a television special, and three short films produced during the same period. A live-action television adaptation titled Pretty Guardian Sailor Moon aired from 2003 to 2004 and a reboot of the anime series titled Sailor Moon Crystal began simulcasting in 2014. Several companies have developed merchandising based on the series, including light novels, collectible trading card games, action figures, musical theater productions, several collections of soundtracks and a large number of video games. The manga series was licensed for an English language release by Kodansha Comics USA in North America, and in Australia and New Zealand by Random House Australia. The entire anime series has been licensed by Viz Media for an English language release in North America and by Madman Entertainment in Australia and New Zealand.

Since its release, Pretty Soldier Sailor Moon has received wide critical acclaim and has become one of the most popular manga and anime series worldwide. The entire series has sold over 35 million copies worldwide, making of it one of the highest selling shÅjo series ever, and reviewers have praised the art, characterization and humor of the story. The anime is popular in several countries and is arguably one of the most influential in boosting the popularity of Japanese animation in Western culture. Pretty Soldier Sailor Moon is often cited with popularizing the concept of a team of magical girls and for revitalizing the magical girl genre. The franchise is also credited with redefining the genre, as previous magical girls did not use their powers to fight evil and the concept is now considered one of its standard archetypes.