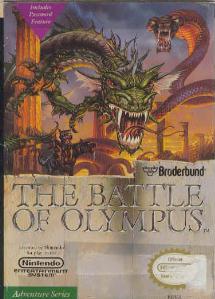 The Battle of Olympus, originally released in Japan as Olympus no Tatakai (ã‚ªãƒªãƒ¥ãƒ³ãƒã‚¹ã®æˆ¦ã„), is a 1988 side-scrolling historical action-adventure video game for the Nintendo Entertainment System developed by Infinity, and published by Imagineer in Japan, by BrÃ¸derbund in North America and by Nintendo in Europe. It was the first game from Infinity, and was designed and programmed by the company's president.

There's also a 1993 Game Boy port of the same game that was published by Imagineer exclusively for the European market. Despite its strong resemblance to the NES original, Infinity had no involvement in that version and was instead ported by the Canadian developer Radical Entertainment.