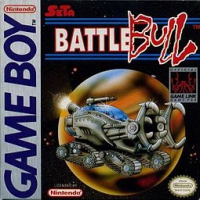 The player controls a driver of an excavation vehicle as he competes in a 48-level tournament of drilling things. Players have to kill rival drivers only by pushing huge stones at them. Most of the other stones are a permanent part of the underground cavern; while others can be used to eliminate the opponents. Money is earned after each level for the purpose of upgrading the player's vehicle. Players can improve their engines, purchase extra lives, shovels that can dig better, and weapons to improve the odds on the playing field. A kill ratio is required to be met in order to reach the next stage. Otherwise, the player remains in the current level. After finishing all 48 levels, the game proclaims that the "battle is over" and that the player becomes "the new champion." The final scene in the game is where the player looks over the sunset with his girlfriend along with the closing credits.

Battle Bull is a maze game that has you controlling a futuristic vehicle outfitted with a turret gun and mechanical claws. Viewed from a top-down perspective, the action involves pushing certain blocks in an attempt to crush rival vehicles. Quickly eliminate the designated number of enemies on each stage, and you'll receive cash that can be used to purchase upgrades in the following five areas: engine, shovel, weapon, jump, and life. Battle Bull features 48 levels of play, with a password feature used to resume progress. Two Game Boy systems can also be linked together for head-to-head action against a friend.