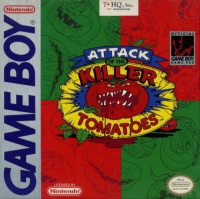 The game's protagonist is Chad Finletter, a young boy is on a quest to stop the evil scientist Dr. Putrid T. Gangreen from unleashing his Doomsday Tomato. During his journey he must fight through legions of mutant tomatoes, although this is a feat he will take on alone as the citizens of San Zucchini are too afraid of the mutant tomatoes to aid him. Much like other platform games of its time, the main method of killing the enemies is to jump on them, in this case squashing them, or breaking them into smaller tomato enemies. There are several bosses to take on including Zoltan, Beefstake, Mummato, Fang, Ketchuck and Tomacho.

The world must be saved from the clutches of the evil Dr. Gangrene and his vicious army of Killer Tomatoes! The terrible tomatoes are back in this loose adaptation of the 1991 television series Attack of the Killer Tomatoes. Play as Wilbur Finletter, Tomato War veteran and veggie stomping extraordinaire. Vanquish such enemies as Tomacho, Zolton, Ketchuck, and the rest of veggie villains planning on spreading their evil seeds of destruction.

Run, jump, and squash your way through action-packed levels and kick some veggie butt in this side-scrolling adventure. Encounter various vegetable enemies on your way to stopping mankind's red menace. Find hidden friends and bonus items that will allow you to dice the competition and make paste of them as you attempt to "catch up" and thwart this nefarious plot.