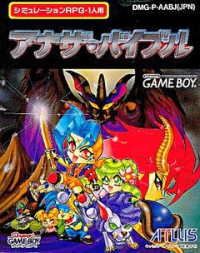 Megami Tensei Gaiden: Last Bible (å¥³ç¥žè»¢ç”Ÿå¤–ä¼ Last Bible, lit. "Goddess Reincarnation Side Story: Last Bible") is a role-playing video game series developed by Multimedia Intelligence Transfer, Sega, and Menue, and published by Atlus and Sega for multiple platforms. The first game of the series, Revelations: The Demon Slayer, was released in 1992; this is the only title in the series to have been released in English. After The Demon Slayer, two sequels and two spin-off titles have been released. In the main series titles, players explore the game world and fight monsters in menu-based battles; players can also attempt to recruit monsters to their party, and can fuse two allied monsters into a single new one to try to get stronger monsters. The spin-off title Another Bible is a turn-based strategy game, while Last Bible Special is a role-playing game controlled from a first person perspective.

The series is part of the media franchise Megami Tensei, but as Last Bible was developed for a wider audience, including children, the series is toned down compared to Shin Megami Tensei. For instance, players meet monsters rather than demons, and most of the Last Bible titles take place in a medieval fantasy world. The music for the first two games was composed by Hiroyuki Yanada and Iwao Mitsunaga, while Yanada composed the music for Last Bible III on his own, and Manami Matsumae composed the music for Another Bible. Critics have been mostly positive to the series, but the games' graphics have received mixed responses. The music, particularly the one in the first two games, has been positively received. Several music albums with the games' soundtracks have been released by Sweep Records.