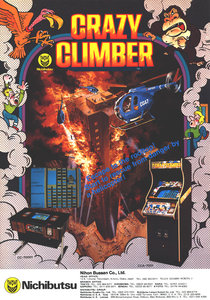 Crazy Climber (ã‚¯ãƒ¬ã‚¤ã‚¸ãƒ¼ã‚¯ãƒ©ã‚¤ãƒžãƒ¼, KureijÄ« KuraimÄ) is a coin-operated arcade game produced by Nichibutsu in 1980. It was also released in North America by Taito America Corporation by UA Ltd. in 1982 for the Emerson Arcadia 2001 and other video game consoles. It is one of Nichibutsu's most highly acclaimed video games in its library. A precursor to the platform game genre, Crazy Climber was the first video game revolving around climbing, specifically climbing buildings, before Nintendo's 1981 release Donkey Kong.