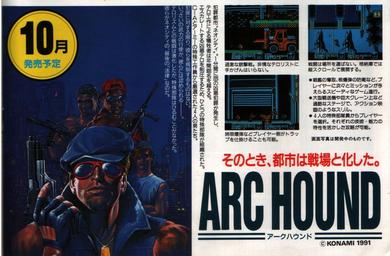 Contra Force is an action shooting game released by Konami for the Nintendo Entertainment System in 1992 exclusively in North America. It is a spinoff of the Contra series, being the third game in the series released for the NES following the original Contra and Super C, although the game's plot and setting are unrelated to previous entries, as the villains in the game are human terrorists instead of an alien menace. The game was scheduled to be released in Japan under the title of Arc Hound (ã‚¢ãƒ¼ã‚¯ãƒã‚¦ãƒ³ãƒ‰, Ä€ku Haundo), with no ties to the Contra series, but was canceled.