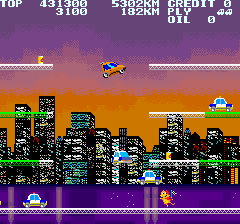 City Connection (ã‚·ãƒ†ã‚£ã‚³ãƒã‚¯ã‚·ãƒ§ãƒ³, Shiti Konekushon) is a video game developed and published in 1985 by Jaleco for the arcade in Japan and published by Kitcorp as Cruisin' outside Japan.

The game supports up to two players (playing alternately). It is a platform game in which the player controls a car that can never be stopped. It can only 180Â° handbrake turn or jump (normal jump or high jump). The object of the game is to drive through a series of cities, avoiding obstacles and painting every part of the roads. City Connection was remarkable for its time as each location had its own background and music which was a variation on the main theme of the game. There are twelve locations: Manhattan, the Grand Canyon, Easter Island, Paris, Neuschwanstein Castle, London, Sydney, Egyptian temples, and cities in India, Holland, China and Japan.