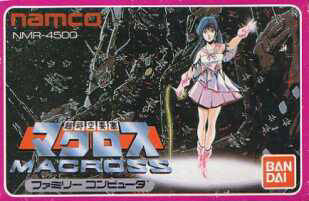 Super Dimension Fortress Macross (è¶…æ™‚ç©ºè¦å¡žãƒžã‚¯ãƒ­ã‚¹, ChÅ JikÅ« YÅsai Macross) was released for the Japanese Family Computer console in 1985 by video game company Namco and is based on the popular anime TV series of the same name. The game is a side-scrolling shoot 'em up in which the player controls a transformable VF-1 Valkyrie variable fighter in an unending battle against an invading race of giant humanoid aliens known as the Zentradi.