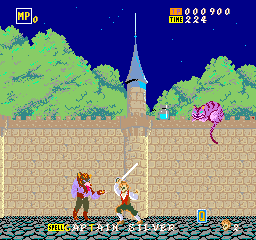 Captain Silver (ã‚­ãƒ£ãƒ—ãƒ†ãƒ³ã‚·ãƒ«ãƒãƒ¼, Kyaputen ShirubÄ) is a side-scrolling action game released for the arcades by Data East in 1987. In the game, the player control a young sailor named Jim Aykroyd who goes on a journey to seek the lost treasure of Captain Silver, facing various perils along the way. Home versions were released for the Master System by Sega and for the NES by Tokuma Shoten.