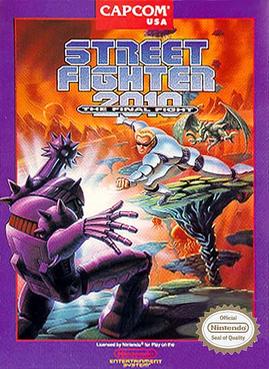 Street Fighter 2010: The Final Fight, released in Japan as 2010 Street Fighter (2010 ã‚¹ãƒˆãƒªãƒ¼ãƒˆãƒ•ã‚¡ã‚¤ã‚¿ãƒ¼, NÄ« Maru Ichi Maru: SutorÄ«to FaitÄ) is a side-scrolling action platform game released by Capcom for the Nintendo Entertainment System in 1990. It was marketed as a science fiction-themed spin-off to the 1987 arcade game Street Fighter. The English localization of 2010 changed the name and backstory of the main character to imply that he was Ken from the original Street Fighter, whereas the protagonist in the Japanese version is a completely unrelated character named Kevin. 2010 is of a different genre from the traditional Street Fighter games, which are competitive fighting games.