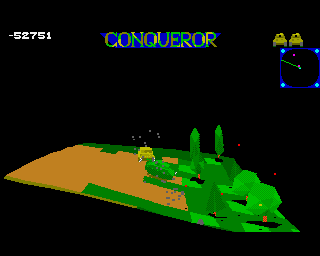 Conqueror is a video game released as the follow-up to Zarch (also known as Virus), using the same landscape engine. It is a third-person shooter with strategy elements in which the player controls a fleet of tanks. It was originally developed and released on the Acorn Archimedes by Superior Software in 1988 and ported to other home computers in 1990 by Rainbow Arts. The game was well received, particularly for its blend of strategy and arcade action.