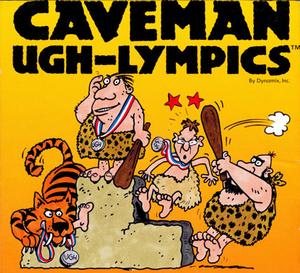 Caveman Ughlympics or Caveman Ugh-lympics is a 1988 Olympic-themed sports video game set in the Stone Age. It was developed for the Commodore 64 and DOS by Dynamix and published by Electronic Arts. The Nintendo Entertainment System version, named Caveman Games, was ported and released by Data East USA, a subsidiary of Data East.