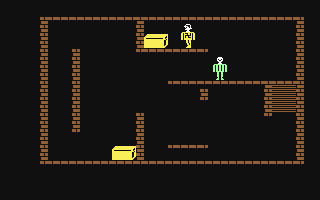 Castle Wolfenstein is an early stealth-based action-adventure shooter video game developed by Muse Software for the Apple II. It was first released in 1981 and later ported to MS-DOS, the Atari 8-bit family, and the Commodore 64. Beyond Castle Wolfenstein was a sequel. This game is notably considered to be the first game that had a World War 2 setting, and the first series in general that would popularize this setting across succeeding games and other unrelated game series in various genres.