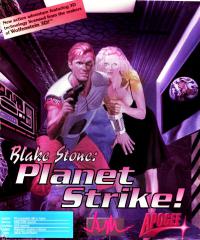 Blake Stone: Planet Strike is a first-person shooter video game, the sequel to Blake Stone: Aliens of Gold, made by JAM Productions and released on October 28, 1994, by Apogee Software

Apogee released the source code, long thought to be lost, under the GPL license in 2013 to promote the sale of the Apogee Throwback Pack on Steam on July 8, 2013.