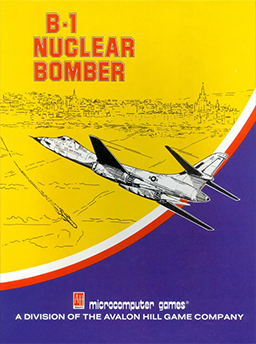 B-1 Nuclear Bomber is a flight simulator game based on piloting a B-1 Lancer to its target and dropping a nuclear bomb. The USSR is one of the target countries. The game was developed by Avalon Hill and Microcomputer Games, Inc, and released in 1980 for the Apple II and other computers.

The game box details a sample scenario set in the then-future of a bombing run over Moscow on July 1, 1991, which turned out to be just months before the official dissolution of the Soviet Union on December 26 of that year.