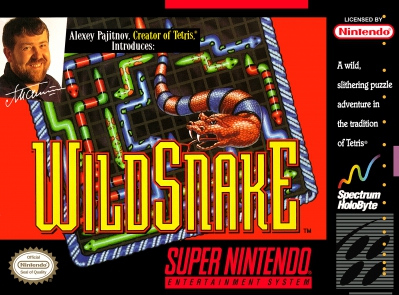 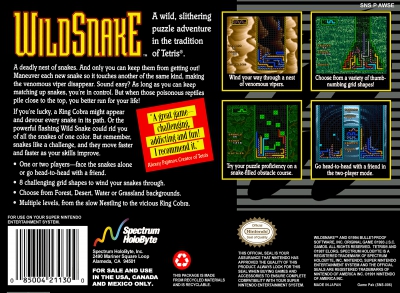 WildSnake is a puzzle game in which the player must manage falling snakes in a confined space and keep the snakes from reaching the top of the space. Snakes fall and slither until they reach a resting spot on the floor of the space. A snake will destroy any other snakes of the same color and pattern that it touches with its head on the way down, which often has the chain effect of loosening the pile of snakes so that all the snakes slither into new positions, possibly eliminating even more snakes. The game is played against a selection of backgrounds including desert, forest, water, or grass. Further, there are 7 game grids including the standard grid (a tall rectangle), X, plus, flask, Diabolo (an hourglass pattern), T-square, and obstacle (with a number of intermediate blocks). The player starts out as a nestling and earns higher and higher distinctions taken from the snake realm (garter snake, water snake, boa, mambo, python, king cobra, etc.) as more snakes are cleared. Also, as the level increases. more types of snake patterns must be handled. Sometimes, there is a flashing red snake that eliminates the first snake it touches. Further, there is occasionally an unstoppable snake that barrels down to the bottom of the space, eliminating all snakes in its path. The game can be played with 1 or 2 players in either easy, normal or hard mode. In the single player mode, the player can choose whether the preview showing the next snake will be shown. In 2-player mode, there is always a preview window. In fact, there is a queue of 3 snakes between the 2 player spaces from which the next snake is drawn. As a bonus during competition, multiple snake eliminations by one player result in obstacles appearing in the space of the opposing player.

A wild, slithering
puzzle adventure
in the tradition
TM of Tetris@.
A deadly nest of snakes. And only you can keep them from getting out!
Maneuver each new snake so it touches another of the same kind, making
the venomous viper disappear. Sound easy? As long as you can keep
matching up snakes, you're in control. But when those poisonous reptiles
pile close to the top, you better run for your life!
If you're lucky, a King Cobra might appear
and devour every snake in its path. Or the
powerful flashing Wild Snake could rid you
of all the snakes of one color. But remember,
snakes like a challenge, and they move faster
and faster as your skills improve.
Alexey Pajitnov,Cteator of Tetris
â€¢ One or two playersâ€”face the snakes alone
or go head-to-head with a friend.
0 8 challenging grid shapes to wind your snakes through.
' Choose from Forest, Desert, Water or Grassland backgrounds.
Multiple levels, from the slow Nestling to the vicious King Cobra.
FOR USE ON YOUR SUPER NINTENDO
ENTERTAINMENT SYSTEM.
SCâ€¢O â€¢.E.
OGO
Wind your way through a nest
of venomous vipers.
SNAK
1318
RATTLER
Tty your puzzle proficiency on a
snake-filled obstacle course.
Official
Nintendo'
Seal of Quality
THIS OFFICIAL SEAL IS YOUR
ASSURANCE THAT NINTENDO HAS
APPROVED THE QUALITY OF THIS
PRODUCT. ALWAYS LOOK FOR THIS
SEAL WHEN BUYING GAMES AND
ACCESSORIES TO ENSURE COMPLETE
COMPATIBILITY WITH YOUR SUPER
NINTENDO ENTERTAINMENT SYSTEM.
AWSEâ€”
Choose from a varieFt' of thumb-
numbing grid shapes!
SGâ€¢'OR.E
SNAKES
Go head-to-head with a friend in
the two-player mode.
WILDSNAKETM AND 01994 BULLET-PROOF
SOFTWARE, INC. ORIGINAL GAME 01993 J.S.C.
GAMOS. ALL RIGHTS RESERVED. TETRIS@AND
01987 ELORG. SPECTRUM HOLOBYTE IS A
REGISTERED TRADEMARK OF SPECTRUM
HOLOBYTE, INC. NINTENDO, SUPER NINTENDO
ENTERTAINMENT SYSTEM AND THE OFFICIAL
SEALS ARE REGISTERED TRADEMARKS OF
NINTENDO OF AMERICA INC. 01991 NINTENDO
m
1.
Spectrum HoloByte, Inc.
2490 Mariner Square Loop
Alameda, CA 94501
FOR SALE AND USE
IN THE USA, CANADA
AND MEXICO ONLY.
THIS PACKAGE IS MADE
FROM RECYCLED MATERIALS
AND IS RECYCLABLE.
85004 21130
OF AMERICA INC.
MADE IN JAPAN
Game Pak (SNS-006)