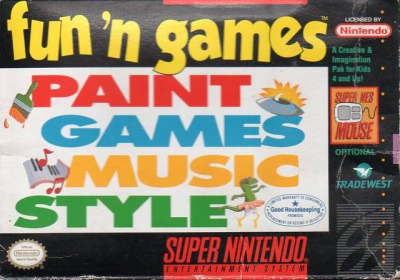 Fun 'n Games presents a mixture of games and "applications". The main menu is divided into four sections: Paint: A paint program that offers different tools and brushes, a few pre-made backgrounds and objects as well as the option to import figures that were created in the sub-games 'Stylin' Stuff' and 'mix 'n match'. Games: Mouse Maze: A Pac-Man-clone in which the player guides a mouse through a top-down labyrinth. To complete a level, all cheese symbol have to be collected while cats have to be avoided. Collecting a bone temporarily transforms the mouse into a dog that can kill the cats. Space Lazer: A shooter seen from the cockpit of a space-ship. The player controls a crosshair and has to shoot increasingly difficult enemies. Whack a Clown: This game is exclusive to the Genesis Version and plays like 'Whac-a-Mole' only with clowns instead of moles. Music: Songs can be composed by choosing from several instruments and putting notes onto a stave. It is also possible to add sound effects (animal noises and others) or edit provided songs. Style: This section contains two mini-games: Stylin' Stuff: Here, the player can edit the sprite of a woman by selecting different clothes, hats or haircuts. Mix 'n Match: Sprites can be created by putting together different heads, torso and legs.