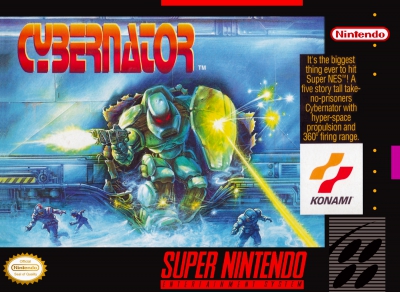 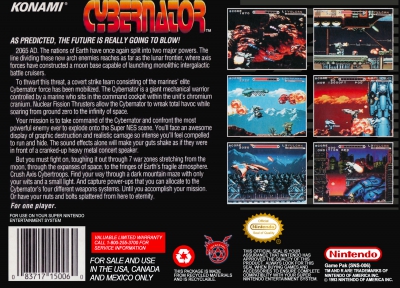 In a future where fossil fuels are limited, major countries and forces of the world are at war with one another over territory. Alliances are made, forming two major sides: The Axis and The Federation. The elite units in these wars are Assault Suits, man-piloted combat mechs called Assault Suits. Jake is one such pilot, drafted into the Pacific States' Marine Corp under the Federation. During his training, the war has grown substantially and upon being assigned to a platoon, he is immediately thrown into combat.

Strap into an armored attack suit and get ready to blast bad guys away in Cybernator for the Super Nintendo Entertainment System. This 1993 title allows players to use lasers, cannons, missiles, napalm, and good old fashioned armored fists to get through each level. The armored attack suit also reflects the attacks of enemies. The goal of each level is to find a special chip to upgrade weapons, increasing the player's power and allowing him to defeat tougher enemies. The game is a side-scrolling platformer that includes seven different levels. The overall ending of the game depends on how well the player does throughout.

KONAMI'
AS PREDICTED, THE FUTURE IS REALL Y GOING TO BLOW!
2065 AD. The nations of Earth have once again split into two major powers. The
line dividing these new arch enemies reaches as far as the lunar frontier, where axis
forces have constructed a moon base capable of launching monolithic intergalactic
battle cruisers.
To thwart this threat, a covert strike team consisting of the marines' elite
Cybernator force has been mobilized. The Cybernator is a giant mechanical warrior
controlled by a marine who sits in the command cockpit within the unit's chromium
cranium. Nuclear fission Thrusters allow the Cybernatorto wreak total havoc while
soaring from ground zero to the infinibJ of space.
Your mission is to take command of the Cybernator and confront the most
powerful enemy ever to explode onto the Super NES scene. You'll face an awesome
display of graphic destruction and realistic carnage so intense you'll feel compelled
to run and hide. The sound effects alone will make your guts shake as if they were
in front of a cranked-up heavy metal concert speaker.
But you must fight on, toughing it out through 7 war zones stretching from the
moon, through the expanses of space, to the fringes of Earth's fragile atmosphere.
Crush Axis Cybertroops. find your way through a dark mountain maze with only
your wits and a small light. And capture power-ups that you can allocate to the
Cybernators four different weapons systems. Until you accomplish your mission.
Or have your nuts and bolts splattered from here to eternity.
For one player.
FOR USE ON YOUR SUPER NINTENDO
ENTERTAINMENT SYSTEM
â€¢conf670
L t VULCAN
V UI-CAN
NO' OOF T
OCOR
40 C N
ONO T 1 N Rep
"C O R 0 30 C
omcjal
Nintendo
Seal of Quality
THIS OFFICIAL SEAL IS YOUR
83717 15006
VALUABLE LIMITED WARRANTY
CALL 1-800-255-3700 FOR
SERVICE INFORMATION
FOR SALE AND USE
IN THE USA, CANADA
THIS PACKAGE IS MADE
FROM RECYCLED MATERIALS
AND IS RECYCLABLE.
Nintendo
Game Pak (SNS-006)
TM AND R ARE TRADEMARKS OF
NINTENDO OF AMERICA INC.
01993 NINTENDO OF AMERICA INC.
ASSURANCE THAT NINTENDO HAS
APPROVED THE QUALITY OF THIS
PRODUCT ALWAYS LOOK FOR THIS
SEAL WHEN BUYING GAMES AND
ACCESSORIES TO ENSURE COMPLETE
COMPATIBLITY WITH YOUR SUPER
NINTENDO ENTERTAINMENT SYSTEM.