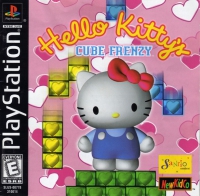 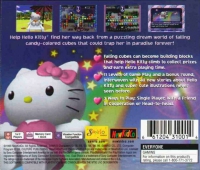 Hello Kitty makes her way on to the PlayStation with Hello Kitty's Cube Frenzy. The adorable kitty, whose popularity among little girls came in the form of plush toys, pencils, backpacks and other merchandise. As Hello Kitty, the popular Japanese character, you move her by making cubes disappear or piling them up in order to get her to collect prizes. After clearing a land, you get to choose where you want to go, changing the story. The story begins when Hello Kitty falls asleep at a beach resort. When she wakes up she finds herself on a strange island surrounded by the smell of flowers. She realizes that her archenemy, Badtz-Maru has played a trick on her and she has been transported to another world. To get back home she has to make it through eleven different lands, each consisting of three stages. There are three modes including: the Story mode; the Extra mode, which appears after you clear all the lands; and the Free Play mode, which allows you to play whatever levels you want either alone, with a partner or against a partner. The game also features a bonus round and cute illustrations of Hello Kitty.