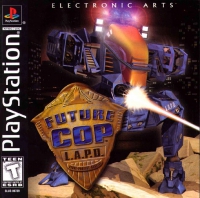 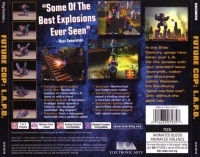 The city of Los Angeles has a few more problems than usual in 2100 A.D. You see, the future hasn't been exactly kind to urban life and now gangs have overrun the already bleak neighborhoods. Is there any hope? There is as long as you enforce the law! Command a powerful Tactical Assault & Combat X-1 mech walker (that can also transform into a sleek hovercraft) and battle through 12 levels, each culminating in a showdown with a large boss character. Fortunately for you, fourteen different weapons are available to help you teach "crime doesn't pay." Feeling a little lonely? If so, a friend can join the action in cooperative play! An additional game mode, Precinct Assault, has also been included. Precinct Assault is a strategy game that involves two teams (red versus blue) in an all-out battle for supremacy. This mode can be played against the computer or another human. Future Cop: L.A.P.D. supports the Dual Shock Analog Controller to make you feel the gunfire, and progress can be saved using either one block of memory card space or a password.