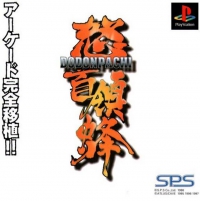 Compared to DonPachi, DoDonPachi is generally known for introducing new gameplay elements while improving or changing existing ones. The overall background of the game, unlike following sequels, remains more or less centered around a supposed invasion by a mysterious race of mechanized aliens, which the player is called to face throughout its run. However, more sinister and shocking secrets lie beneath the surface, accessible only to those brave and skilled enough to clear the entire game.