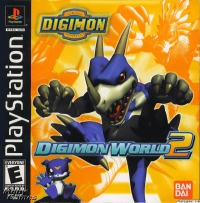 Digimon World 2 (ãƒ‡ã‚¸ãƒ¢ãƒ³ãƒ¯ãƒ¼ãƒ«ãƒ‰2 Dejimon WÄrudo Tsu?) is a dungeon crawler game developed and published by Bandai. The player controls Akira, a Digimon Tamer whose goal is to climb to the top of the Digimon World. Akira lives in Digital City, a town located in fictional "Directory Continent", a land where digimon used to live peacefully. However, wild Digimon began attacking Akira's hometown, and Akira joins a guard team that is charged with protection peace and security of the region. At the start of the game, Akira finishes his last Training Mission and joins one of the Guard Teams (the player has the option of choosing between the Black Sword Team, the Gold Hawks team, or the Blue Falcon team). He receives missions from the Team Leader, which involve entering Domains and hunting down evil Digimon.

PlayStation gamers can return to the joys of digital monster training in Digimon World 2. This second edition of the Digimon game includes all of the creature development and battle of the first game with a few enhancements to gameplay. A "DigiBeetle" automobile is now available to allow players to drive about instead of walking everywhere. As Digimon creatures advance, there is a option to fuse two of them into one, extra powerful digital monster. Players can control a team of three Digimon in this version of the game and can enter their group into battles with other teams of creatures.