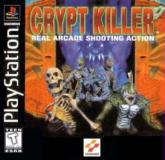 Light-gun games have been rather sparse on the Playstation, but CRYPT KILLERS tries to remedy that. The game starts with an ancient legend: an ancient civilization existed before the more recent civilizations of the Mayans and Egyptians, but that civilization suddenly disappeared. Some believe that aliens visited the ancient civilization and left behind crystals that allowed people to travel through time. These crystals became known as the Eyes of Guidance. The search for the crystals has heated up since more information has been discovered; you know the locations of the eyes and want to claim them. Move through six levels of catacombs, tombs, tunnels, and rivers while blasting skeletons, spiders, zombies, and rats. If using the standard controller makes life too difficult, plug in any Playstation compatible light gun and let the good times roll. Do you have the skills and reflexes to survive CRYPT KILLERS?

A port of the arcade title of the same name, Crypt Killer is an on-rails light gun title in the vein of such games as Area 51 and Lethal Enforcers. Seeking the fabled "Eyes of Guidance," players embark on a journey spanning six levels, each infested with wave upon wave of monsters, mutants, and undead creatures, all of whom must be summarily dispatched in order to continue onwards. Although initially equipped with a shotgun, players can acquire more powerful weapons such as a Gatling gun, automatic rifle, or grenade launcher along the way. Also in your arsenal are smart bombs that can be utilized to clear the screen of lesser enemies in a single blast.

Each of the game's six levels can be completed in any order, and span such locales as dense forests, tombs, and catacombs. Within each level, players will on two occasions happen upon alternate pathways that require a decision as to which direction should be taken. All however, lead to a boss character that must be destroyed in order to complete the level. Crypt Killer supports both single- and two-player simultaneous play with standard controllers or light gun peripherals.