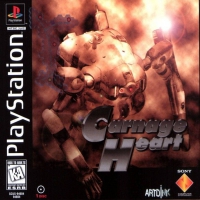 Carnage Heart (ã‚«ãƒ«ãƒãƒ¼ã‚¸ãƒãƒ¼ãƒˆ) is a video game for the PlayStation, developed by Artdink. Its gameplay is a mecha-based, turn-based strategy game, where the player takes the role of a commander in a war fought by robots. The robots, called Overkill Engines (OKEs), cannot be directly controlled in battle; they must be programmed beforehand to behave in a certain way under certain conditions using a flow diagram system.