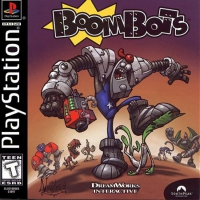 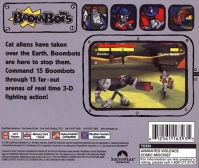 Save the world in this hilarious free-roam arena based combat game. Join Boomer and his friends as they try to free the Earth's cats from the Feline Aliens. Battle until your bolts pop out, using projectile weapons, hand-to-hand combat and grapple moves. Or collect power-balls to achieve the all-powerful mongo-mode and quickly turn the evil Boombots into scrap metal. The cats of the world are counting on you. Hilarious story line keeps you laughing, attack your opponent from anywhere in the free-roam, combat arenas, fight as any of the 15 characters in 15 arenas, each with unique characteristics, use projectile weapons, hand-to-hand combat, grapple moves and the mongo-mode in over 12 different simple-to-operate combinations to destroy the competition.

In Boombots you take command of 15 fighting robots in order to stop the evil Cat aliens who have invaded Earth. Players can participate in either a Campaign mode or a Versus battle mode as they fight through 15 combat arenas.

Each Boombot has their own advantages and disadvantages. Boomer is the leader and has balanced attacks and strong close-up strikes; Hans, Texas Walker has huge arms that allow for greater reach; Pittsburgh is pure metallic muscle; and Airplane is a modified World War II plane that can fly long distances across the arena.

There are a number of weapons littering the arenas that your Boombots can use during battle, such as machine guns, homing rockets, and missiles, along with an assortment of melee strikes and holds. Shields, Mongo power-ups, and bombs can all be used to send your enemies to scrap pile.