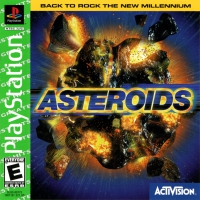 You are an employee of the Astro-Mining Corporation. Your mission is to simply go to an assigned area of space and clear the area of asteroids and the occassional debris. The game consists of five zones, each with a different background and some with special features. Each zone has 15 levels. In addition to the standard asteroids, there are also mined asteroids that explode; indestructible asteroids that are, well, indestructible; fireball comets; crystal asteroids that regenerate; alien egg asteroids containing deadly baby space worms; and ancient energy asteroids that shoot back! And there's plenty of enemies in addition to the asteroids, such as Standard and Super Saucers, Asteroids Tugs, Fuel Transports, Hexes, Nuke Drivers, and Vulturoids. There are three types of ships to choose from, each with different strengths and weaknesses. There are also three skill levels. If you beat the game at Expert or higher, you gain access to a fourth type of ship. All ships features the standard laser, shield, flip (instantly flips your ship 180 degrees), and hyperspace. There are also limited power-ups you can pick up such as GunSat, Mines, Homing Missiles, Plasma Drill, and Trigger Bombs.

Asteroids is the 1998 PlayStation update of the classic Arcade hit. Coming almost twenty years after the original, the gameplay remains intact: pilot a small ship through an asteroid field, armed only with a laser cannon and a shield. Avoid the asteroids hurtling toward you, while blasting them into smaller and smaller pieces until they disappear entirely.

The PlayStation version, however, utilizes 3D graphics and adds several new options. There are now eight different types of asteroids and obstacles including the Classic Asteroid, Mined Asteroid, miscellaneous space debris, fiery comets, and the Indestructible Asteroid. Now players can use three different ships, including the well balanced Dagger, the low armored but maneuverable Rapier, and the slow turning, firepower intensive Longsword.

In addition to the UFO that tormented your ship in the original game, Asteroids features eleven other enemies that try their best to keep you from achieving the highest score. New enemies include flying saucers, crystallized ice ships, various turrets, repulsion units, and the suicidal Kamikaze units. You'll be supplied with a vast array of wildcard weapons including mines, homing missiles, plasma drills, trigger bombs, lasers, and the Missile Armageddon.

Asteroids features a simultaneous two-player mode where you and another player battle against each other in the asteroid field. The original 1979 classic is also included.