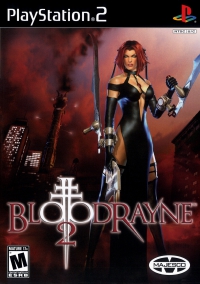 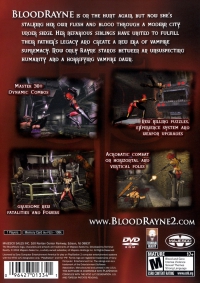 In the FMV, Rayne is first seen staring at a place on fire. The next scene happens before the fire. Rayne is seen entering a library (called Blood library), with a few Nazis inside. Knowing Kagan is here (who is an influential Nazi collaborator), she declares she is here to kill him. Kagan notices she is here, but is not moved by her presence. He knows it is his offspring (but does not know her name), but says she smells "tainted", asking who was her mother. He does not know her mothers name, saying he is "terrible with names", but does not care, knowing she died with her family. He appears pre-occupied, looking for something. He finds what he was looking for, called the "Vesper Shard". Knowing Rayne still wants to kill him, he then brings Professor Trumain up from the floor, severely beaten, showing his own small intestine around his neck. Kagan knows that they know each other, and that Trumain "stole" yet another offspring from him. During his talk, he speculates that the Brimstone Society knew the Vesper Shard's powers, and was eventually going to kill their Vampire allies such as Rayne. Trumain then pulls out a detonator, first giving time for Rayne to run, then detonates the grenade.

BloodRayne is a third-person action title starring a secret operative whose mission is to wipe out opposing threats to world security. As female agent BloodRayne, players will be able to tap into her natural talents for hunting down enemies by using her traits as both a human and vampire. Armed with two wrist-mounted silver blades, Rayne can slice and dice would-be assailants as well as throw projectiles or use various firearms.

BloodRayne's primary mission will take her to an underground temple in South America, where it is rumored an elite group is trying to unite three parts of an ancient talisman to control the world. As she fights to prevent this, BloodRayne will need to consume the blood of her victims to sustain her life and increase her power. To fight her, the supernatural enemies will plan ambushes or call for reinforcements if the odds are not in their favor.

As BloodRayne becomes more proficient at killing, her abilities will increase as well. Talents include speed, agility, vision, and the ability to slow time to attack multiple enemies at once. The amount of blood she drinks also makes her stronger, beginning with Bloodlust and culminating in Bloodrage. Cinematic cut-scenes highlight certain actions for dramatic effect as well as further the story as the operative gets closer to her goal.