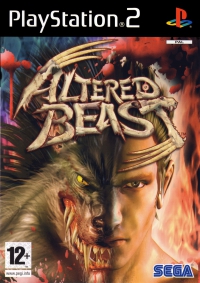 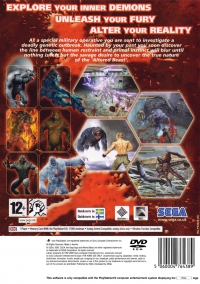 The story follows a man called Luke Custer who is a "Genome-Cyborg", which in the game is a human that has had his DNA and other genetic make-up altered so that he can (after acquiring the chip containing the right genes for each creature) transform into a mythical beast. The main creatures he transforms into are a Werewolf, a Merman, a Garuda, a Wendigo, a Fire Minotaur, and a Thunder Dragon. Its storyline differs from the original Altered Beast games where during the game, you gain a serum that allows you to change at will. There are a number of difficult boss challenges and puzzles within the game, plus some extra characters to transform into including a White Tiger Man, a Grizzly Bear, and the alien-cloned U.W.H. (Unidentified Weightless Human) for those who finish the game.

DEMONS
UNLEASHVouRFURV
ALTERY9UR REALITY
AS a spÃ©c:al military operative yoware.sent to investigate a
deadly genetic outbreak. Haunted by your past ywsOondiScover
the line bÃ©tween human restraint and primal instinctuill blur until
nothing i'4e#P
ut the savage desire to uncover the true nature
of the 'Altered Beast'.
sea
www.sega.co.uk
12+32
Quickstarts in:
Quickstarts in:
www.pegi.info
1 Playerâ€¢ Memory Card (8MB) (for PlayStation@2): 115KB minimum â€¢ AnalogControlCompatible: analogsticksonlyâ€¢ Vibration Function Compatible
â€¢ and â€¢PlayStationâ€¢ are registered trademarks of Sony Computer Entertainment Inc.
All Rights Reserved. Made in Austria.
@ SEGA. 2005. SEGA. the Sega logo and Altered Beast are either registered trademarks
or trademarks of SEGA Corporation. All rights reserved.
Library programs 0 1997-2005 Sony Computer Entertainment Inc. exclusively licensed
to Sony Computer Entertainment Europe. FOR HOME USE ONLY. Unauthorised copying. adaptation. rental. lending.
distribution. extraction, reâ€¢sale, arcade use. Charging tor use, broadcast, public performance and internet, cable or
any telecommunications transmission. access or use of this product or any trademark or copyright work that forms
pan ot this product are prohibited. Published by SEGA. Developed by SEGA.
5 060004 764389
This software is only compatible with the PlayStation@2 computer entertainment system displaying the
PAL logo