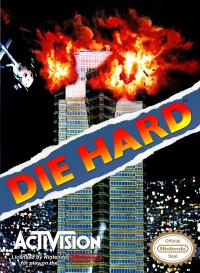 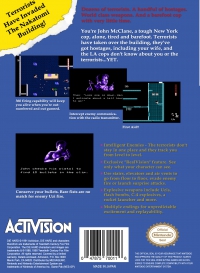 There are 40 terrorists scattered throughout the building and John McClane's task is to clear each floor of terrorists and he can then use the stairwell or the express elevator to travel upwards, to a maximum of floors 31-35 (more floors are unlocked in "Advanced" mode). In addition, by shooting at grids in the wall, John is able to climb in the vents, dropping into a designated spot or moving down or up a floor. At the start of the game, the player character can only use a pistol (with 15 bullets) and his fists to dispose of enemies, but later acquires several weapons, such as submachine guns, explosives and flashbangs which the terrorists can also use. When McClane is shot, a few picked up items can drop where he must pick them up again. However, bullets have minimal range, only shooting straight or on a 45 degree angle. McClane's health, which is drained by bullet wounds, can be restored by collecting soda cans from either enemies, snack machines (by shooting several bullets at them) or empty rooms. The player loses the game when all life is lost. The player has about four minutes before one of the six locks are opened, but can gain more time by destroying the main computer on the fifth level. Once all the locks have been opened, the vault is opened and the game's final battle is triggered. The player has only a few minutes to go to the 30th floor, for a final confrontation with Karl, Hans and any of the 40 terrorists left alive. One interesting aspect of the game allows the player to listen to Hans shouting orders to his guards through a two-way radio. However, after the second lock is opened, Hans will tell everyone to not use the radio. Also notable is the "foot meter". The meter starts out full, but will eventually decrease if the player character steps on shattered glass or runs around. If the meter becomes empty, McClane will walk much slower than he does when the foot meter is full. It can be restored by collecting med-kits. The game features cinematic sequences which change the story depending on which actions the player takes. For example, if there is fewer than one minute left and the player defeats Karl, the last scene with John and Holly will tell the player the roof has been destroyed by the helicopter sent by Hans.

Much like the movie upon which this game is based, 'Die Hard' for the Nintendo Entertainment System retains much of its original appeal. Clear the Nakatomi building of terrorists as John McClane and free the imperiled hostages from their clutches. Begin as a barefooted McClane with no weapons and defeat the early enemies unarmed to take their guns. See the world through McClane's eyes and immerse in the game world with the 'Real Vision' first-person view feature. Remember to conserve ammunition as you strategically make your way through the multi-level building in this exciting, vintage, 1-player shooter for the Nintendo Entertainment System.

11
360 firing capability will keep
you alive when you're out-
numbered and out gunned.
You're John McClane, a tough New York
cop, alone, tired and barefoot. Terrorists
have taken over the building, they've
got hostages, including your wife, and
the LA cops don't know about you or the
terrorists...YET.
Theo :
â€¢ Lock one is down
I est i mate about a ha 1 â€¢f
Han Â±
Intercept enemy communica-
tion with the radio transmitter.
John checks h is p is to 1
â€¢F i nd IS bul 1 in the
Conserve your bullets. Bare fists are no
First Aid!!
Intelligent Enemies - The terrorists don't
stay in one place and they track you
from level to level.
Exclusive "Real Vision" feature. See
only what your character can see.
Use stairs, elevators and air vents to
go from floor to floor, evade enemy
fire or launch surprise attacks.
Explosive weapons include Uzis,
flash bombs, C-4 explosives, a
rocket launcher and more.
Multiple endings for unpredictable
excitement and replayability.
Official
NinTendo'
Seal
match for enemy Uzi fire.
DIE HARD 0 1991 Activision, DIE HARD and characters
therefrom are trademarks of Twentieth Century Fox Film
Corporation. The DIE HARD characters and images are
trademarks & 0 1988, 1990 Twentieth Century Fox Film
Corporation. All rights reserved. Covered by a limited
warranty. Details enclosed. Activision, P.O. Box 3048
Menlo Park, CA 94025. Distributed by MEDIAGENIC.
Nintendo and Nintendo Entertainment System are
trademarks of Nintendo of America Inc. Game Pak (NES-GP)
o
THIS OFFICIAL SEAL IS YOUR ASSURANCE THAT NINTENDO
HAS APPROVED THE QUALITY OF THIS PRODUCT. ALWAYS
LOOK FOR THIS SEAL WHEN BUYING GAMES AND ACCES-
SORES TO ENSURE COMPLETE COMPATIBILITY WITH YOUR
NINTENDO ENTERTAINMENT SYSTEM.
47875 70011
MADE IN JAPAN